Well there is a very simple but telling reason: better isolated houses and apartments. In many houses in the earlier days wine racks could be found in colder parts of the house. The average room temperature was around 17°C/62°F. More and more houses today though are better isolated and even houses with air conditioning are getting closer to 23°C/73°F, which is way above the threshold of 21°C/70°F where your wine undeniably goes bad.

So a fast recap what goes wrong. Most wine lovers buy better, and also more expensive wines. They want to protect their investment and get even more in well equipped wine cellars or multi temperature refrigerators.  But then when the wine is taken out to be enjoyed during a dinner with friends or family, it becomes warm immediately. A wine that has to be enjoyed at 15°C/59°F  and is taken out and left in a room that is 23°C/73°F is the same as if you would put the wine in the shade or in the sun, you basically have just ruined your favorite wine.

But why? What happens exactly inside the chemical structure of the wine that makes the ideal conservation and serving temperature so important? Bear with us for a moment. By explaining how wine ages, you will also understand what the effect is of warmer temperatures on your red wine.

As wine ages, tannins bind together and form long molecules chains in a process known as polymerization. Once these chains get long enough, they drop out of the chemical solution at settle at the bottom of the bottle. If you've ever noticed a layer of sediment in your wine, it's the result of polymerization. Over time, it removes the wine's bitter taste, making it smoother, lusher, and more rounded. Most of the tannins in wine come from grapes and grapes seeds. A few come from the oak barrels they're aged in, which is why aged wine tends to have an oaky taste.  As grape tannins drop out, the oaky ones become more noticeable.

One of the other molecules tannins bind to are anthocyanins, water-soluble pigments that give wine its color. Fresh red wine is bright red with a purplish tint, but as it ages, and the wine's monomeric anthocyanins polymerize, the color changes to brick red and then eventually to brown, which is a sign it has gone bad.

Humans are only capable of detecting five basic flavors: sweet, sour, salty, bitter, and unami (meaty or savory). These five flavors aren't capable of creating the full range of complex tastes you enjoy in a bottle of red wine. Those come from the wine's aroma, which is actually a combination of three different aromas produced during different parts of the wine making process. The first is the varietal aromas, which come from the grapes. The second is the vinous aromas, produced during fermentation. And the last are the tertiary aromas, which come from a series of organic compounds called esters that are created when the acids in the wine interact with the alcohol. These interactions continue throughout the aging process, even as the varietal and vinous aromas grow weaker. A properly aged bottle of red wines might contain over 200 esters and that is what give wine its delicious bouquet. Esters are used to create an extremely wide range of aromas. Common ones include plum, mint, tobacco, vanilla, pine, pepper, almond, truffle, chocolate, coffee, caramel, cinnamon, or smoke.

All of these chemical reactions speed up as the temperature increases. Reactions that might have taken several years at low temperatures might take place in several months or several hours at high temperatures. So how come people are so afraid of storing red wine at high temperatures? Because not every chemical reaction reacts to heat the same way. They all have different heat thresholds. Some require small amounts of heat and some require more. Tannins, for example, polymerize at lower temperatures while sugars react at higher temperatures. Exposing the wine to excess heat ruins the internal chemistry that gives it its flavor. At 13°C/55°F, all of these reactions proceed at roughly the same rate, which is why it's considered the optimal red wine storage temperature.

High temperatures also encourages the formation of acetic acid, which is formed when bacteria (Acetobacter aceti) in the air come into contact with alcohol. Acetic acid is one of the main components in vinegar and the bacteria that produce it thrive at high temperatures, which is another reason why experts recommend storing all your wine at 13°C/55°F.

Storing red wine at sub-optimal temperatures is also harmful, though not nearly to the same degree. Some reactions will still proceed quicker than others, but the rate of reaction is usually slow enough that it won't seriously damage your wine if you're only storing it at those temperatures for a short period of time 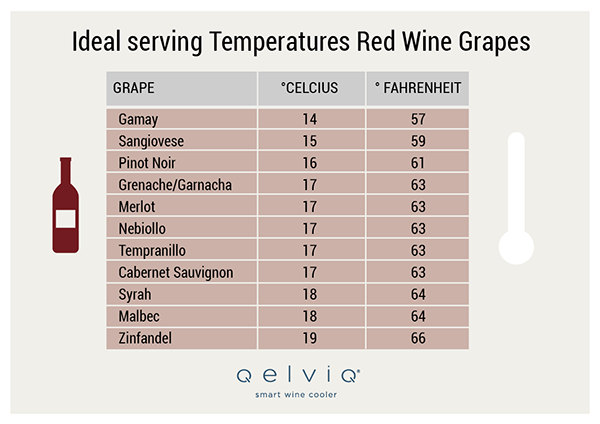 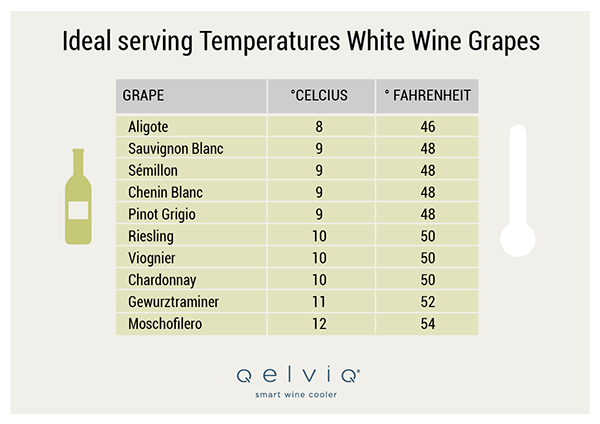 Never worry about serving your wine at the wrong temperature again with QelviQ, Your Personal Sommelier.